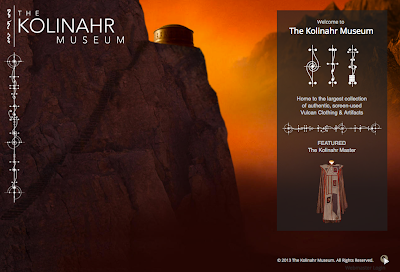 Jordino Delos Santos is maybe the biggest collector of Vulcan screen used props & costumes from Star Trek.  Ever since the It's A Wrap auctions in 2006-8, Jordino has been collecting, cataloging and preserving Vulcan costumes.

Now he has finally published his website that catalogs and displays high quality photography of every one of his artifacts.  he has called this website "The Kolinahr Museum" and it is the best Star Trek prop & costume website I have seen.

Jordino displays everything in a "museum" format, and the text supports that you are looking at a collection from some futuristic museum.  He even has a mission statement:

“ The Mission of The Kolinahr Museum is to collect, preserve, study, exhibit, and stimulate the appreciation for and advance the knowledge of Vulcan art and artifice, that collectively represent the broadest spectrum of Vulcan achievement and culture.” 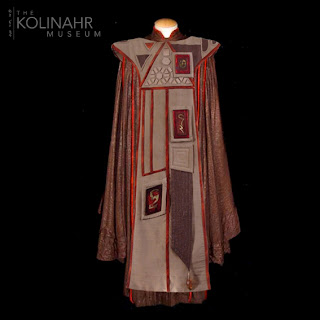 So make sure you add The Kolinahr Museum to your list of must see Star Trek prop & costume websites!

Alec
Posted by Loken at 8:44 AM No comments:

Sorry to say that the best source for behind the scenes info on all the Star Trek productions, "Drexfiles" is gone.  Doug Drexler has a post on his Facebook page saying he took the blog down because of complaints by some that he marked every image with the logo "Drexfiles".

The blog, produced by long time Star Trek art director Doug Drexler, was a source of info for years for all of us hard core Star Trek prop & costume collectors and fans of every ilk.  Doug would post images of everything from models to concept art, and have dozens of comments from industry insiders.

Many times I have used his blog as reference for authenticating items, especially the Jem Hadar Battleship model that Profiles in history claimed was screen used.  Finding all of Doug's photos helped in identifying that it was not in fact screen used and that it was just an extra made by the model shop.

I met Doug in 2009 while doing the Battlestar Galactica auctions.  I got a call from him and he said he had heard about me and what we were doing with Galactica and he wanted to meet about Propworx selling his collection.  At that point I didn't know Doug, but I soon found out what a fantastic history he had with Star Trek.

Doug had, over the years, amassed quite a collection of Star Trek  props and set decoration in his role with Star Trek: The Next Generation, Deep Space Nine and Enterprise.  I got to catalog and photograph Doug's collection, and in August 2010, Doug's collection made up the vast majority of the first Propworx Star Trek auction.  It was a huge hit, and with the addition of Robert Picardo's collection, we held the auction at the Creation San Diego Las Vegas Convention.

Doug is a rare bird in Hollywood.  Starting as a make-up artist, and winning an academy Award for his work on Dick Tracy, Doug spent the first 3 years on Star Trek: The Next Generation doing make-up and applying Worf's nose!  He then moved to art direction, learning new skills and staying at the forefront of a whole new department.  Few people in Hollywood will actually make this type of transition.

But Doug wasn't finished, as he then again moved from more traditional art direction to computer generated imagery (CGI) where he won an emmy for "Battlestar Galactica".  So Doug really has traveled a long journey through Hollywood and I for one hope that he will bring back Drexfiles at some point.

I don't write about replicas often, but Roger Romage, a good friend of mine, produces some of the finest Star Trek TOS prop and set dec replicas out there.  Roger's latest project is the original 3D chess set.

So many of you have asked for this over the years and now this fantastic item is brought to you by exclusive agreement with Starfleet R&D East. We are proud to offer these for a fraction of the price of an original set, if you can even find one!

This is a PRE-ORDER item and should be ready to ship within about 3-4 weeks. These chess pieces were used quite often, in many episodes. You may remember Charlie melting a set with his mind powers.

I only have 7 sets available! That is all the mold can handle before it wears out. After these are gone there will be NO MORE! This is a once in a lifetime opportunity, so don't delay, order today!

For more information contact Roger at: trekclassic@hotmail.com.  Roger is a great friend of mine and you can trust him.

I. Mudd Necklace on eBay

An original necklace from the TOS episode "I, Mudd" has come up for sale on eBay.  These have popped up from time to time and the provenance on this one seems accurate.  I am pretty sure the model maker it came from is Greg Jein.  He has the biggest TOS collection anywhere. From the eBay Ad:

OK Star Trek Friends, I put this up before and got an avalanche of emails- How did I know this is real, how can I prove it, could they come to my house to see it (not happening), literally global emails. With the additional photos I hope I address any previous questions.
Its history: I am selling this for a friend I worked with at Viacom for Paramount. We developed licensed merchandise for Star Trek, the original series. I was the creative director, she the brand director (business side). As brand director for Star Trek Paramount Pictures Viacom store, was responsible for sourcing items for the store. She worked with a famous Star Trek model maker to create the Star Trek: Original Series and Star Trek: The Next Generation, ships on display. This model maker gave her the necklace as a gift.
The model maker has asked that their name not be mentioned in this auction, and I am honoring that promise. Please do not ask me via email. It was verified authentic to the show, that two of the #118 were made, one lit up, the other did not. The light up one had wires that ran along the chains. If they were not going to light up in a camera shot, they used the one without the wires. This is the one that is for sale.
The suitcase is constructed of wood, lucite and velvet lined. The closure and hinges are metal and I think are brass. Closed the box is 3 3/8" wide by 2 5/8" tall by 1 1/4" deep. The necklace pendant is 2 1/2" wide by 1 1/2" high by 1/2" deep. Total length of necklace is 20" long. It is constructed of plastic, hollow center and hand stenciled. The chain is light weight metal.

Guaranteed authentic, my reputation as an art director with the entertainment industry and feedback on Ebay mean a lot to me. People have asked for a letter of verification, this is the best I can do. It will come with the original box it was shipped in, from 1998.