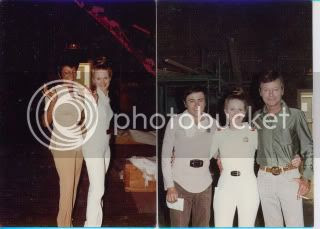 Well I got another email from Louise Stange-Wahl, who goes by "Weezie". Weezie is a former actress who was on the set of Star Trek: The Motion Picture, and has been looking for her uniform from that movie. As noted in my last post, it was a white sciences Class "D", size 8. But sadly, there has only been one example that has surfaced, and that was at Christie's. As noted on the forum, because many of these jumpsuits were converted to crewman uniforms for Star Trek II, it is quite possible that the white ones were the first to be used because they could be dyed easily.

Anyway, Weezie, has sent another photo and here it is!

I received this email from a former Star Trek background actor. Maybe one of you can help! 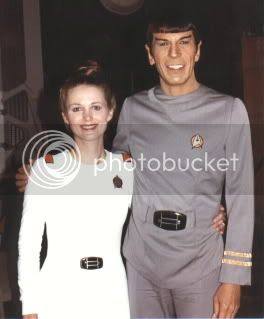 "Hi Alec!
I just discovered your blog, and started at the beginning and read it all. Fascinating, to say the least. I am an "old-timer" with STAR TREK, and in fact got to see them shoot some of TOS back in 1967. I was also one of the lucky people who got to work in ST: TMP. and thus, I have to ask you if you might be able to help me locate the uniform I wore in the film. I know there have been a boatload of auctions but have seen my uniform listed. It was a white jumpsuit, science department, women's size 8. Attached is a photo of me in it.
I tried to buy it right after the film wrapped, and even with Leonard trying to help me, Western Costume had them all in storage.
Since you are a major collector, you might be able to give me some idea if it might be out there someplace and how to search for it!
Many thanks!
Weezie
Louise Stange-Wahl" 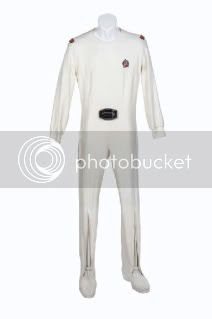 The Christie's listing can be found here. Not sure if that is Weezie's, but it is similar at least.
I love this version and missed bidding on it at Christie's, so maybe the winner is out there and will help Weezie out!
Alec

A way to celebrate the 40th Anniversary of the Moon Landing

This "Mockumentary" is just hilarious. Buzz Aldrin does a Rap video with Snoop Dog. You will laugh your butt off.

Making of Buzz Aldrin's Rocket Experience w/ Snoop Dogg and Talib Kweli from Buzz Aldrin
Posted by Loken at 1:06 AM No comments:

$375 Million Worldwide Sensation Beams Up to a Single and Two-Disc DVD
and Three-Disc Blu-ray November 17, 2009
HOLLYWOOD, Calif. (July 17, 2009) – This year audiences thrilled at the triumphant voyage of the Starship Enterprise and her young and vibrant crew in movie theaters across the planet — and on November 17, 2009, the world will go where no one has gone before when STAR TREK debuts as a three-disc Blu-ray with digital copy, two-disc DVD with digital copy and a single-disc DVD from Paramount Home Entertainment. Bursting with “spectacular action” (Hollywood Reporter) and “pure filmmaking exhilaration” (Rolling Stone) director J.J. Abrams’ sensational reinvention of the “Star Trek” franchise was hailed by critics and embraced by long-time and new fans alike, earning over $375 million at the worldwide box office. Starring a hot young cast including Chris Pine (Carriers), Zachary Quinto (”Heroes”), Zoe Saldana (Avatar), Karl Urban (The Bourne Supremacy), John Cho (Harold & Kumar Go To White Castle), Anton Yelchin (Terminator Salvation) and Simon Pegg (Shaun of the Dead), the global smash hit also features seasoned actors such as Eric Bana (Munich), Bruce Greenwood (National Treasure: Book of Secrets), Winona Ryder (Girl, Interrupted) and the original Spock himself, Leonard Nimoy.
“I cannot wait for fans of Star Trek to check out the home entertainment release of the film. The behind-the-scenes features on the DVD — and especially the Blu-ray — give a wonderful look at the crazy hard work and incredible fun that went into making this movie,” said J.J. Abrams. “The cast and crew were truly extraordinary to work with — watching these special features, you’ll see why. And for people who didn’t catch Star Trek in the theater, I hope they do now, as Paramount has done an exceptional job with this release; the picture and sound quality are both excellent.”
The STAR TREK DVD and Blu-ray will boast out-of-this-world special features to take viewers even further into the new universe of the rousing space adventure. The two-disc DVD and three-disc Blu-ray include in-depth explorations of the reimagining of the franchise, the phenomenal cast, the spectacularly real action sequences, the powerful score and the captivating aliens, commentary by J.J. Abrams, the writers and producers, a gag reel and a digital copy of the film. Additionally, the discs feature compelling deleted scenes that reveal a side story involving Nero with a first-ever look at Abrams’ version of the infamous warrior Klingons.
The STAR TREK Blu-ray boldly ventures beyond the final frontier with over three hours of sensational bonus footage including branching pods that allow for enhanced exploration, more fascinating features on the starships, planets, props, costumes and sound of STAR TREK, as well as a Starfleet Vessel Simulator and access to the latest NASA news about real-life space exploration via BD-Live.
The two-disc DVD and three-disc Blu-ray will also offer a home entertainment first: groundbreaking augmented reality technology. Using a webcam, a Star Trek visual cue will morph into a 3D holographic tour of the U.S.S. Enterprise on the screen, providing a unique immersive and interactive experience.
DVD:
The STAR TREK two-disc DVD is presented in widescreen enhanced for 16:9 televisions with Dolby Digital English 5.1 Surround, French 5.1 Surround and Spanish 5.1 Surround with English, French and Spanish subtitles. Special features are as follows:
Disc 1:
Disc 2:
The STAR TREK single-disc DVD is presented in widescreen enhanced for 16:9 televisions with Dolby Digital English 5.1 Surround, French 5.1 Surround and Spanish 5.1 Surround with English, French and Spanish subtitles. The single-disc DVD includes the commentary, “A New Vision” and the gag reel.
BLU-RAY
The STAR TREK three-disc Blu-ray is presented in 1080p High Definition with English 5.1 Dolby TrueHD, French 5.1 Dolby Digital and Spanish 5.1 Dolby Digital with English, English SDH, French, Spanish and Portuguese subtitles. Special features are as follows:
Disc 1:
Disc 2:
Disc 3:
STAR TREK
Street date: November 17, 2009
Runtime: 127 minutes
U.S. Rating: PG-13 for some intense sequences of sci-fi action and violence and brief suggestive content
Canadian Rating: PG for violence
More Star Trek Home Video News To Come
Next week Paramount should be announcing details on the Star Trek Season Two and the Next Generation Films Blu-ray sets, and possibly more. TrekMovie will have all the info as soon as it is available
Posted by Loken at 2:09 PM No comments:

The Prop Store of London, one of the good guys in prop and costume collecting, have a Captain Archer Command Uniform and Jacket on eBay. This is a combination of two Archer items that were sold on eBay by IAW in April of 2007. Prop Store has put this up with a $6,669 price on a Buy It Now.


The jumpsuit is the distressed version sold by IAW here. It went for $1,292.89 and that low price was because of the significant distressing and fake "goo" used on the uniform. 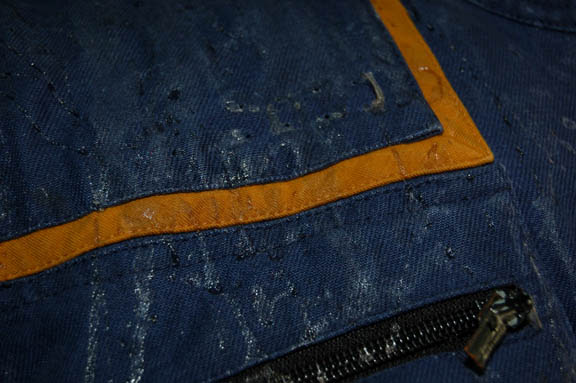 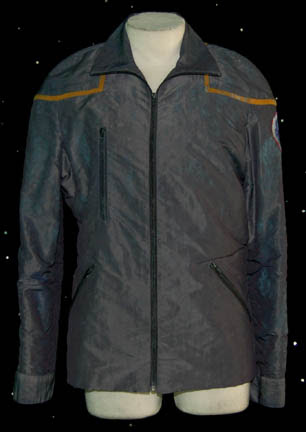 Being a collector of Captain's costumes, I generally try and keep aware of the market for these. Archer's have gone for $4-5,000 in general, with distressed versions going much less (Generally under $2,000) . For example, my Archer, the one used in the final episode "These are the Voyages" is rare because of the two patches, sewn on name tag and epaulettes. I bought this from IAW for $5,000. Use that for comparison here.

These two Archer items originally sold for about $ 2,700 total, so $6,669 is a huge mark up from that price. Nothing against Prop Store of London, as they are a business and need to make a profit, but considering where the market is, this is priced high. If these were pristine versions, I think the price would be in the ballpark. But considering they are distressed, I think this should be in the $ 4,000 range.

Of course, Prop Store is very professional, and you will be well taken care of and the item shipped well. They will also be present at Comic Con if you are going, and if you see there booth, say hi to Stephen, the owner and Tim, his assistant. Two great guys. 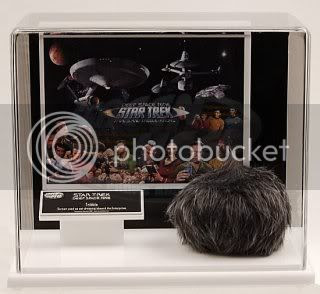 According to the description:

This is one of the tribbles used on screen during the filming of this episode. The custom display case measures 10" tall x 11.5" wide x 6.5" deep.

I think this is a very good deal and someone should jump at it! The display case is a great addition and this is well priced at $ 499. As most people know, I think Screen Used are one of the few good guys in the prop industry, so I recommend them.

The Making of Star Trek: The Motion Picture

A member of the Star Trek Prop, Costume and Auction Forum posted these and they are worth checking out! 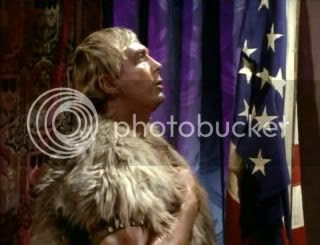 Happy Birthday to the greatest country on multiple Earths!

And stay tuned as I will be getting back to a more regular posting schedule after the holiday!

Everyone have a SAFE and happy Fourth of July!

Alec
Posted by Loken at 9:12 PM No comments: