My second article for StarTrek.com was just published and I reprint it here. Most of this I have covered before, but it was meant as a primer for fans. I hope you enjoy it! 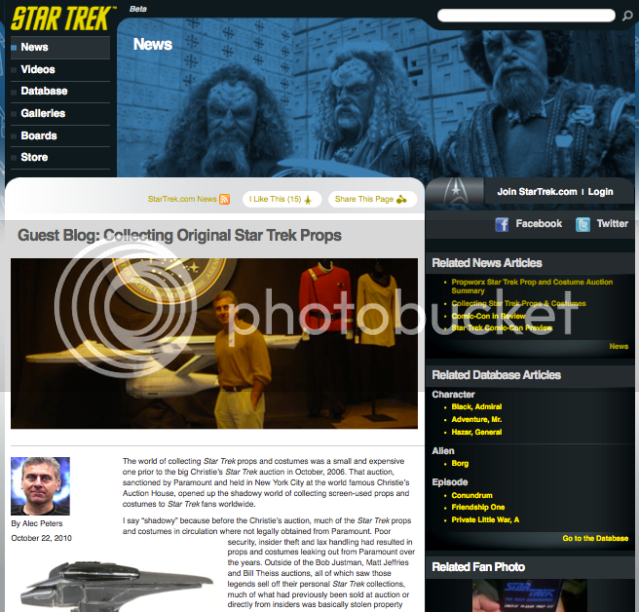 The Replicas You SHOULD Own 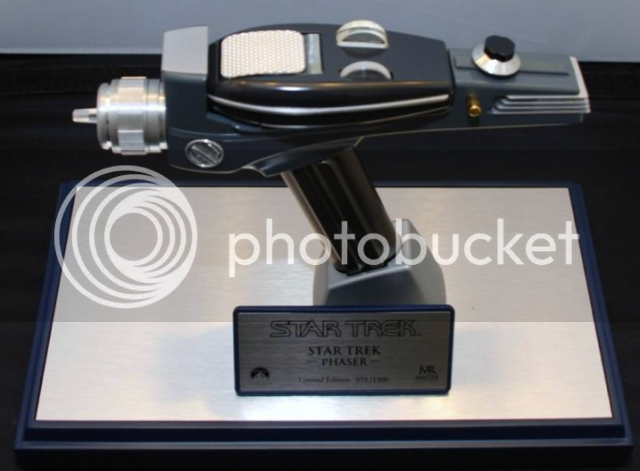 Well, most of my collecting friends will tell you I don't collect replicas. But there are exceptions. The TOS Master Replicas versions are the best in the business. I own all four that they produced for Star Trek TOS; the Phaser, Communicator, Tricorder and Klingon Disruptor. They all are made of metal and plastic (the Phaser is really heavy.....just like you would expect a real Phaser to be) and incredibly detailed. There have simply never been anything close, and they even light up and make sound.

Plus, they are beautifully presented on impressive bases with clear plexi cases. So they display very well.

I remember having these on my mantle in Atlanta and after a dinner party for three couple I knew, we all were drinking in my TV room and the guys started taking the props down and playing with them, amazed at how detailed they were and how they were just like one might expect the real thing to be. Of course one of the wives said "Can you boys put down the toys and sit down!" We were having too much fun. 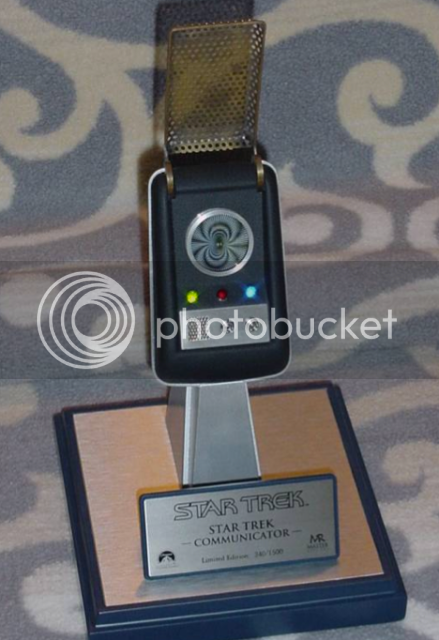 You can find these on eBay, search "Master Replicas" and "Star Trek". The Phaser will set you back about $ 1,000, being the most popular of the lot. There are also William Shatner and Leonard Nimoy autograph versions, but that just means you get a plate with their autograph. Not so impressive, save your money as they cost more.

I highly recommend them as they really are the pinnacle of Star Trek collecting. 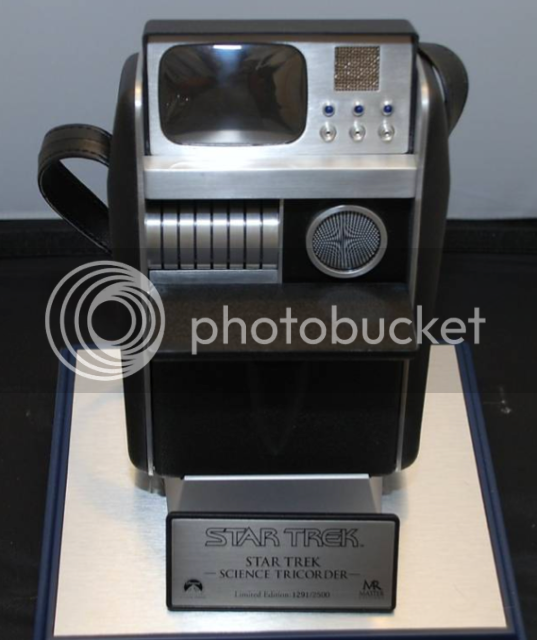 How to destroy a good costume 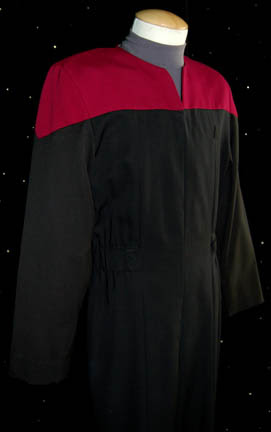 Well, Miami Sci Fi has never been a favorite of mine. Their prices are outrageous and they have tried to cause problems for me in the past when I brought their issues to light here on this blog. They are also banned from the Star Trek Prop, Costume & Auction Forum.

Well, now they have shown how little they know about screen used props & costumes by getting the Robert Picardo Emergency Command Hologram costume that was originally acquired from IAW signed by Bob Picardo in big black Sharpie! You can see their eBay listing here.

As most collectors know, this only destroys the value of the item. You NEVER get a real prop or costume signed. Get a replica signed, that is cool, but not the real thing.

So this costume, which sold for $ 2,469 from IAW, and which Miami Sci Fi wanted $ 5,000 for, they have now marked down to $ 2,999.99 and I doubt anyone will buy it at this price. I always liked this costume and episode and would have bought it for $ 3,000. I was the under bidder in the IAW auction originally! But signed as it is, I wouldn't be interested in it at any price.

Take this as a lesson prop collectors! NEVER get your items signed. An autograph only diminishes the value of a real prop or costume. 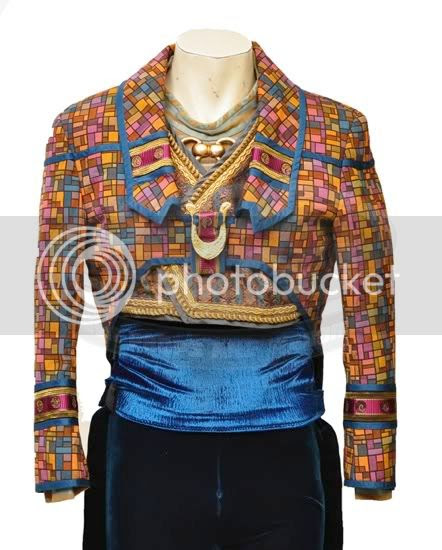 First let me say I like the guys at Screen Used. They and Prop Store of London are the two big players in direct sale movie props. But when you take consignments from customers and set the price at whatever the consignor wants, you get people who set unrealistic prices and it makes the company look bad.

This is the problem with asking $ 7500 for a Quark costume that typically sells for $ 2,000 (the highest IAW ever got for a Quark is $ 2,126). It is just insane. You can see it here. Ultimately, the only person who would pay that is some poor Star Trek fan who doesn't know better. And then he will find out he got taken and it will sour him on the hobby.

There needs to be a point where a consignment prop store like Screen Used knows the value of a prop or costume and prices it accordingly. Frankly, if this consignor asked me to offer this costume at anything over $ 3,000, I would say no thanks. It just isn't worth it.

I just dealt with this with a Star Trek Prop Forum member who bought costumes from Miami Sci Fi at outrageous prices and is now trying to sell them. He now knows he overpaid but what can he do?

Now before anyone gives me the "Well he should have done his homework" line, let me tell you that always pisses me off. You hear that from long time prop collectors. No one wants to share any info. It is every man for himself. Exactly how do you do homework when you don't know anything about the hobby?

It is the duty of EVERYONE in this hobby to protect newbies, share information and look out for each other. That is what this blog has helped do, that is what everyone on the Star Trek Forum does for each other all the time (and why it is the best group of people in the prop hobby). 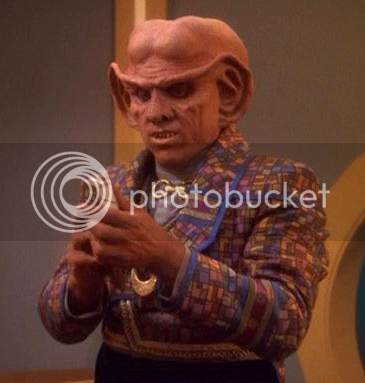 So, while I like the guys at Screen Used, I got to say this costume at this price is just ridiculous. And just so you have a point of reference, Captain's costumes go around $ 5,000.

So I am trying to get a bunch of blogs up this week. To start I want to let those of you who dealt with It's a Wrap that Colin Warde, the one guy at IAW who really went out of his way for us collectors, that he is doing well and living in Oklahoma. He now has a son, who is about 1 year old. I spoke with Colin the other day and he sounded very happy.
There is actually a growing film business in Oklahoma (seems every state wants a a bite of that apple!) and Colin is keeping busy doing a lot of different things for different publications.

If you are on Facebook, you can say hi to Colin at his page. We all owe Colin a debt of thanks, as Colin kept many of us from going crazy dealing with the total lack of communication from anyone else. Colin would spend an hour on the phone with you talking about Star Trek, and he was always available to help solve a problem.
We wish Colin continued good fortune!
Alec
Posted by Loken at 10:57 AM No comments: