The TOS female mini-dress that popped up on eBay last week has caused quite a stir.  You can see it here.  The discussion has been whether it is a 3rd season or a Phase II and I can tell you pretty conclusively that it is a Phase 2.

I met with Bruce and Laurie Carlson yesterday and they were very nice people.  They took plenty of time out of their day to show another collector and myself the costume and admitted they don't know much.  Bruce worked on Star Trek 1-6 as a grip and had plenty of stories.
I inspected the costume, and then compared notes with Gerald Gurian, who I consider a very good authority on TOS costumes.  Gerald and I recently authenticated a TOS Gold Velour costume, and so I know his expertise and his openness to discussion.
THE COSTUME
The costume is in amazing shape, and comes complete with 3rd season insignia and braid.  I will tell you upfront, that the plastic zipper, and the square weave fabric, makes it pretty clear that this is a Phase 2 costume.  Note that while the photos show it golden, it is TOTALLY green.  Just bad lighting!
Here are the photos: 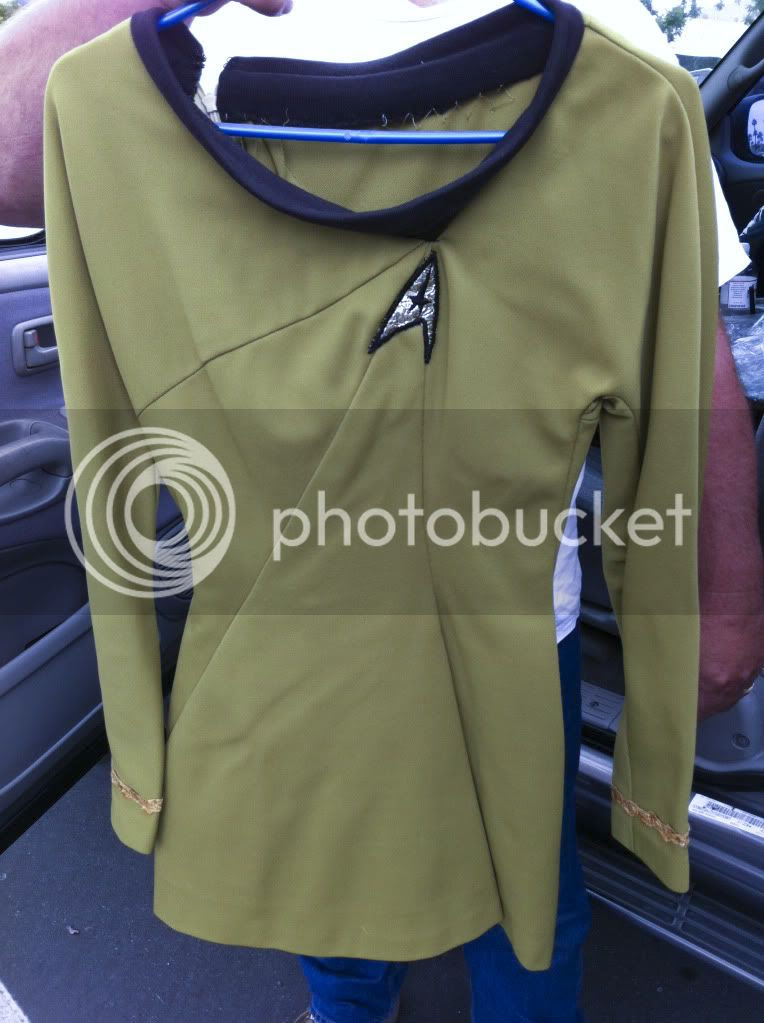 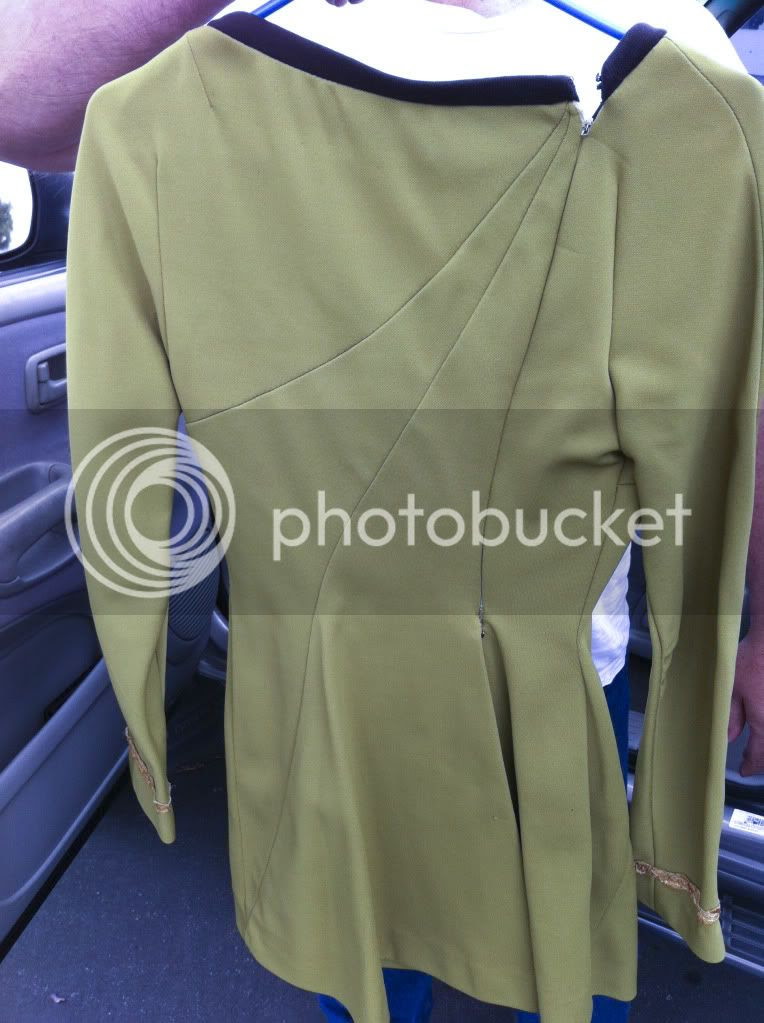 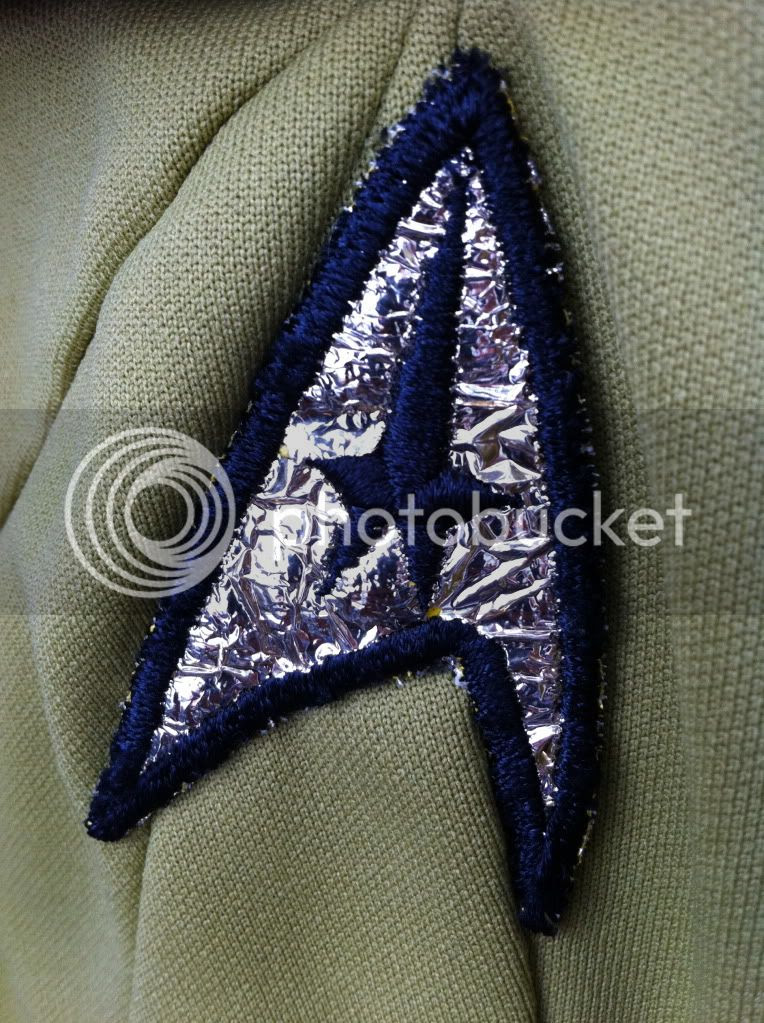 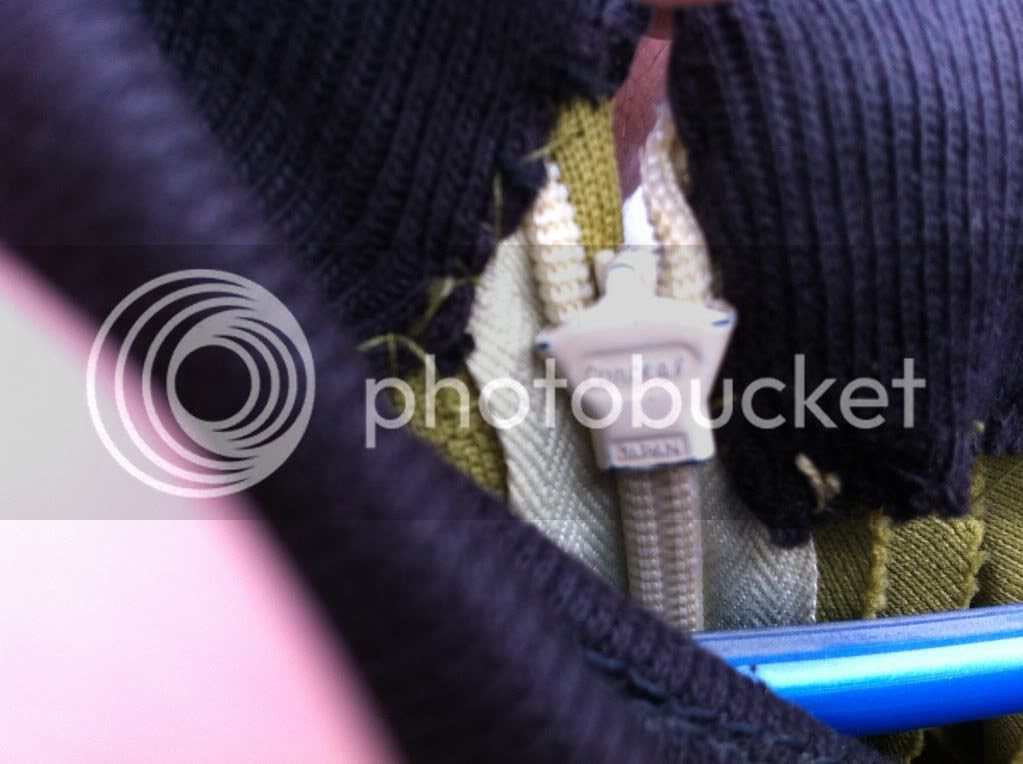 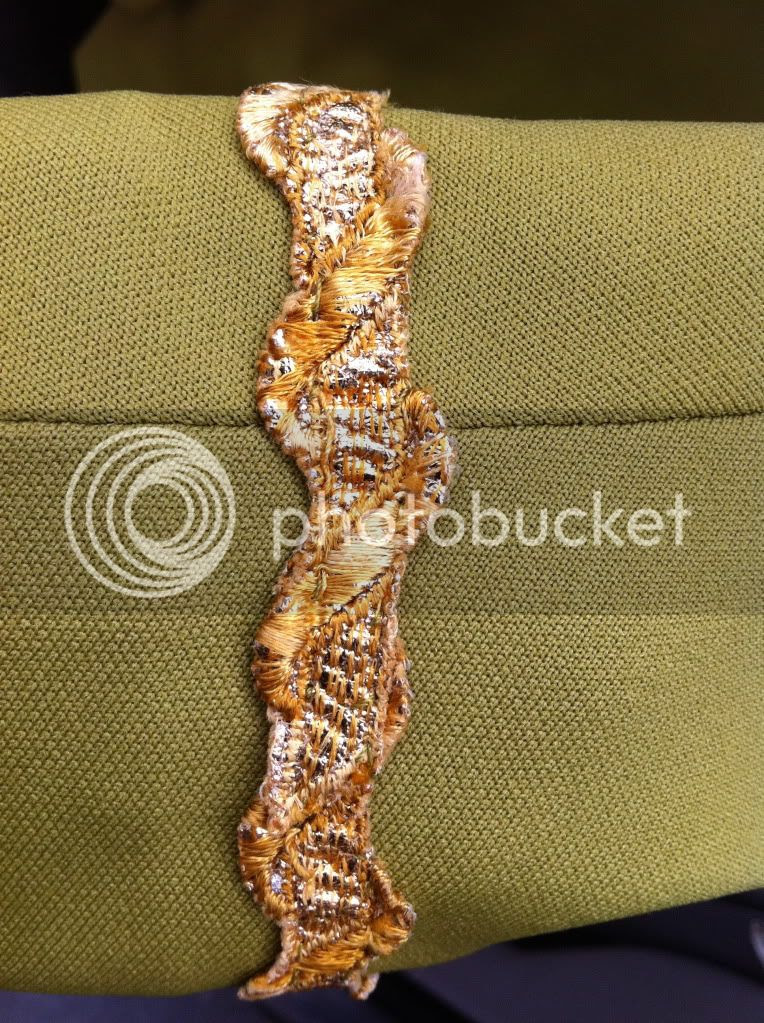 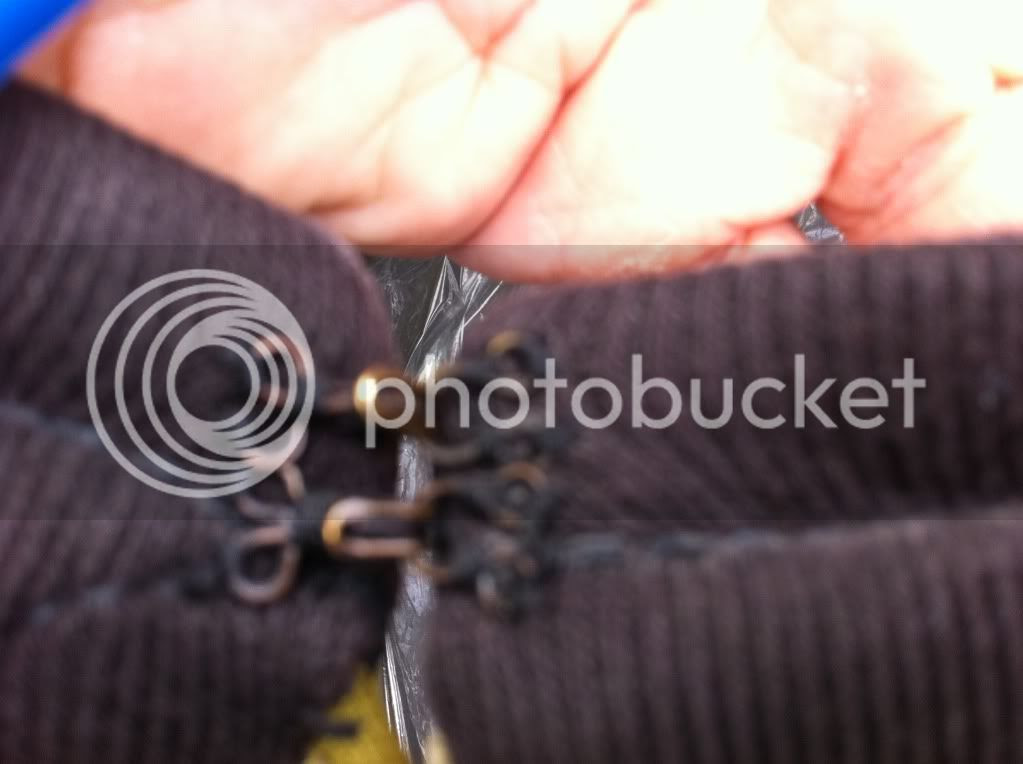 NOW HOW WE KNOW THIS IS A PHASE II COSTUME 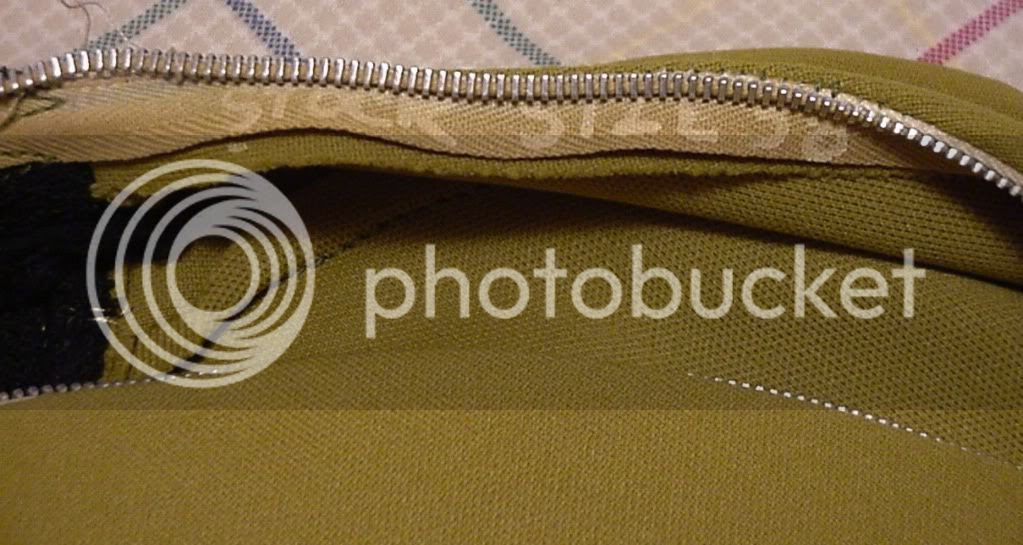 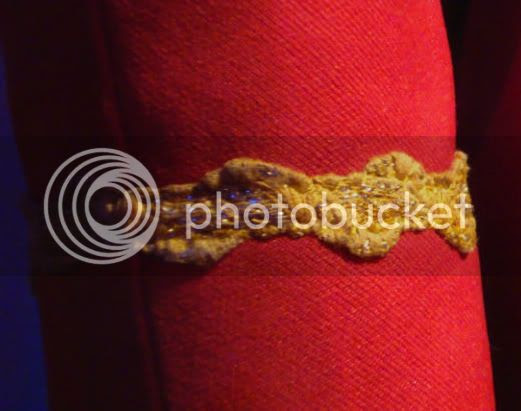 SQUARE WEAVE
This is the fabric that  is used on Phase 2 costumes.

So a few people who I have talked to concur that this is a Phase 2 costume and not a TOS 3rd season one.  Still, it is a beautiful piece and I think it will go over the $ 5,000 starting bid.
Alec
Posted by Loken at 7:29 PM 1 comment:

The two big fails, were, as predicted, the Spock costume from TMP (no bids) and the Shuttlepod (no bids).  You didn't have to be a genius to know that the TMP Spock Robe was worth maybe $ 15,000 TOPS and that this one would never hit the $ 30,000 reserve.  And since Martin Netter already had one Shuttlepod, and was the only guy likely to be interested in something so big, that this one would not sell either. 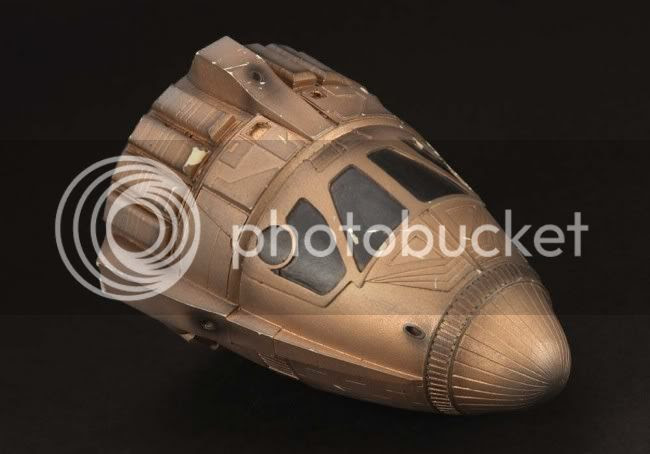 The biggest shock was the nose cone to the Phoenix, which went for a shocking $ 15,000!  That blew me away, but you never know what people like.  (There is an unpainted one from Doug Drexler in the Propworx auction).

The Bajoran, Cardassian and Romulan PADDs all went for $ 1,000 which I thought was rich, but not too much so.  All were nice pieces.  These at $ 1,200 (when you factor in BP) is the high end of the spectrum, but not crazy.
The distressed Archer jumpsuit from Enterprise was reasonable at $ 3,000 ($ 3,600 with BP).  The Prop Store has been trying to sell that one for a while, but it was overpriced I felt.  An Archer is generally a $ 5,000 costume in good shape, and this one was somewhat distressed.  A couple people have asked me about this over the past year or so, so I am happy to see it go at a fair price (and to a respected forum member!).
I also thought the distressed Janeway from "Scorpion" was a solid deal at $ 3,000 ($ 3,600 with BP), as it had a comm badge and a stunt Tricorder.  I just don't think you will get a better deal than that. So good buy whoever got it!
Amazingly, the hero Tricorder went for a paltry $ 2,250 ($ 2,700 with BP).  That is a steal!  I was so tempted to bid on it, but alas I nee dto moderate my buying habits and I just made a big score that took my budget for the year!   But what we have seen lately, after last year's Tricorder bonanza in Profiles June 2010 auction, was prices going down for Tricorders.  I think now is the time to buy one. 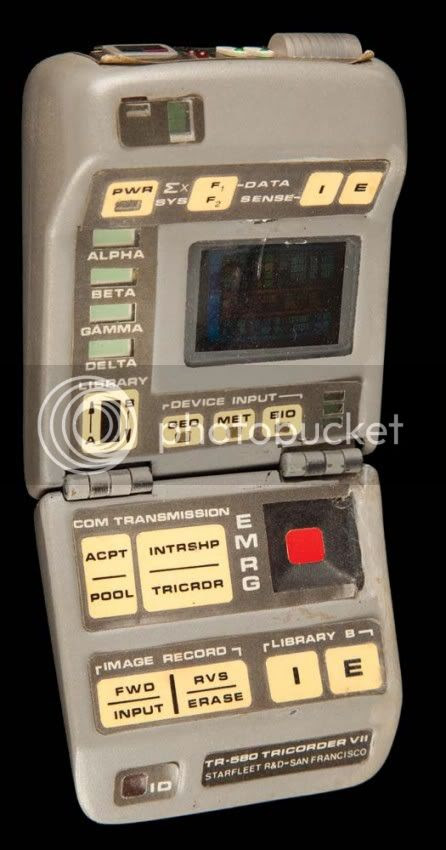 Alec
Posted by Loken at 9:35 PM No comments:

The Propworx Star Trek auction will have over 200 Star Trek props, costume, original art and more in it, and the Propworx Star Trek web site is up and running with blog posts about different items.
Now, as many of you know, Propworx is my company.  I started it when Battlestar Galactica was coming to an end in 2008 because I didn't want us collectors to have to deal with It's a Wrap again after the Star Trek auctions and the non-stop customer service problems.
I think over the past 2 and a half years we have proven to be the most collector-friendly auction house out there.  We have a passion for what we do, and nothing is more important to us than Star Trek.  So I am sure you will find this a really awesome sale and even find some amazing TOS pieces that you haven't seen before.
So check out the Propworx Star Trek site every day as new content goes up!
Alec